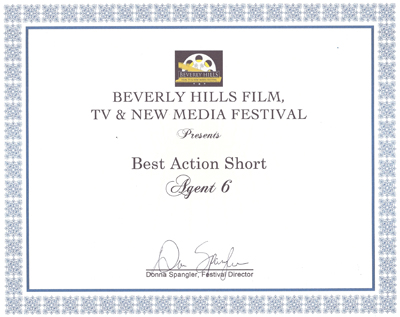 After screening at the Laemmle Music Hall 3 off of Wilshire blvd., The festival award was given to Carpenter after a brief speech at the closing night ceremonies hosted by Sofitel In Beverly Hills, California. Entertainment industry professionals had a chance to gather and celebrate the end of the successful and eclectic film festival. Festival director Donna Spangler handed out the awards as she graciously thanked every filmmaker and sponsor responsible for making the festival a great success.

The Tiger House Films team had a great experience at this film festival. Other than “Agent 6” having won it’s second festival award to date,  the team had a great opportunity to meet new film makers in the Los Angeles area with whom they hope to collaborate in the near future.

Aside from the top notch parties and networking events, The Beverly Hills Film, T.V. and New media festival held expert panels discussing the new age of web content and marketing films according to the newest online trends. These panels were incredibly informative and gave new insight into the future of major mainstream media content on the web.

Below is a brief description of the festival, taken from their website:

“The Beverly Hills Film, Television & New Media Festival is an international, competitive festival that aims to present an elite selection of independent cinema and television content and serves as a forum for prominent film and TV industry members and independent filmmakers to meet, learn from each other and share ideas in the heart of Beverly Hills.”

Below is a brief statement from Jason Kent Carpenter:

“The Tiger House Films team hopes to attend the Beverly Hills Film, T.V. & New Media Festival again in the future. The experience was well worth the attendance for our Los Angeles production company.”