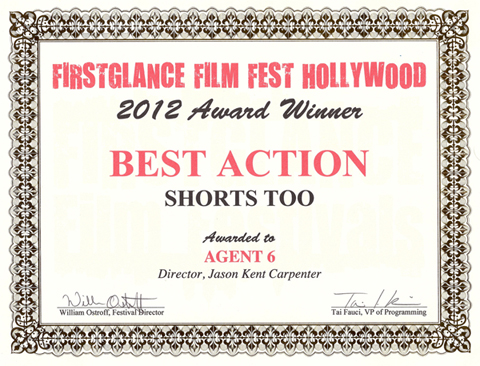 Our experience at FirstGlance was phenomenal, Bill Ostroff the festival director is a very nice person. As soon as we walked on to the lot at Raleigh Studios the atmosphere felt right for a film screening. Agent 6 was screened in a private theater on the lot with many film fans in attendance.

Whenever filmmakers are surrounded by people who love films as much as they do, it gives the festival a certain appeal and that particular atmosphere was present during our screening. Independent filmmakers are still the lifeblood of this business and it was great to bond over our mutual appreciation for this art form during the event.

Tiger House Films is proud to be a part of FirstGlance Film Festival and would like to thank them for running a great festival as well as screening Agent 6 at the Chaplin theater inside Raleigh Studios. The event was a very enjoyable experience for the entire Tiger House Team and thank you for our seventh film festival award!