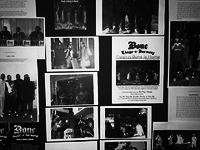 Following the premier of the film at the Playhouse West Film Festival this past weekend in North Hollywood, we are excited to announce that Newfilmmakers New York has scheduled the screening of “Agent 6” in their summer lineup for 2011.

Screenings will be held at the historic Anthology Film Archives in New York City. The venue is a film archive and theater located at the 32 Second Avenue on the corner of East 2nd Street in the East Village neighborhood of Manhattan, New York City devoted to the preservation and exhibition of film, with particular focus on independent, avant-garde, and artist work.

“The NewFilmmakers Series was begun in 1998 by NYU Film Students in order to show their work and promote themselves in New York film community. Then, and now, most festivals and screening programs in the city only screened known and established filmmakers and there were few that are open to new filmmakers.

Without sacrificing our original mission NewFilmmakers has grown into recognized international screening series and over the past fourteen years has screened over 600 feature and 2,000 short films. In 2000 we brought the Havana Film Festival to New York and in 2002 we started the highly successful NewFilmmakers Los Angeles.”

Our Los Angeles production company Tiger House Films is honored to be apart of the Newfilmmakers Series in NYC and we are looking forward to the event at the Anthology Film Archives in downtown Manhattan.