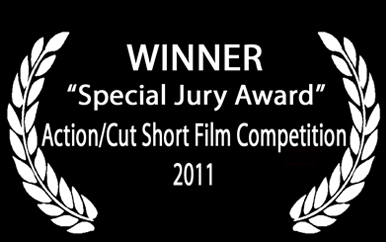 Los Angeles production company Tiger House Films’ Agent 6 has won the “Special Jury Award” under the fiction category at the Action/Cut Short Film Competition. This marks the first film festival award for the secret agent thriller Agent 6 which has began its festival run in May of 2011. The film made its debut at the Playhouse West Film Festival, screening in North Hollywood’s El Portal Theatre to a packed audience.

Agent 6 has been screening at film festivals in and around the Los Angeles area and has gained momentum due to positive reviews from audiences and peers. Audiences have particularly taken a liking to the visual style of the film as well as the music incorporated into the story.

Action/Cut is a unique, industry-based, Los Angeles competition which showcases filmmakers from across the world, recognize the most talented, and honor their work by bringing them to the attention of the Hollywood film industry.

The Action/Cut Short Film Competition industry Jury Committees are composed of working professionals within the motion picture world in Los Angeles including directors, producers, writers, agents, and film company executives. This creates an opportunity for emerging independent filmmakers to showcase their talent as the future of the entertainment industry.

The Tiger House Films team is honored to have Agent 6 recognized by the jury of the Action/Cut Short Film Competition in receiving this film festival award. Our Los Angeles production company hopes to compete again in this competition in the near future.

Please check out the link to the Action/Cut Short Film Competition awards page below: